This weekend we went to see the Red Bull world cliff diving final, I must admit I couldn’t really be arsed going and it didn’t really seem like my kind of thing, quite frankly the only thing I was excited about was getting a Subway sandwich on the way there. Standard.
But…. On this occasion I will admit that I was wrong! I was very pleasantly surprised and we had a great day out.

So we pull up to the tiny town of Tiwi and it is just hoaching with cars and buses so Colin gets a little inventive with his parking by moving road block signs and reversing his car into the space. Ruuuuuude Boy! At least we could park quite close. 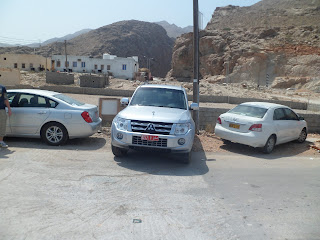 I wasn’t really prepared for a hike though, no one mentioned that bit and the most “sturdy” shoes I could find were my box fresh Lacoste golf shoes, they aren’t so box fresh anymore..
So we had about a 15 minute mini hike, well anything is a hike at 34 degress with 60% humidity, through the rocks and over the river then into the Wadi.
The entrance into the Wadi.. This means “valley” in Arabic. 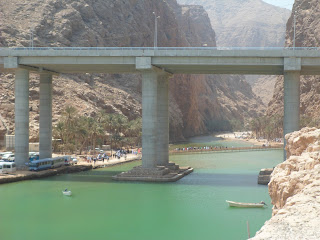 So we just followed the hundreds of people walking into this valley and I totally did not expect what we got when we arrived, it was pretty frikkin awesome. It was like a massive party with blaring music, dancing, people everywhere! The only thing missing was the bar 😉 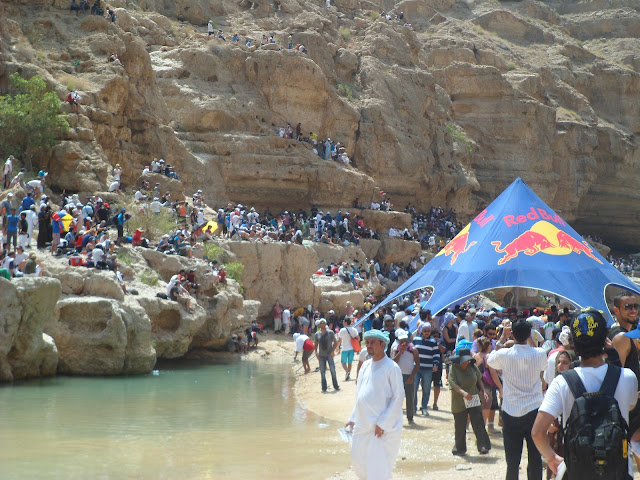 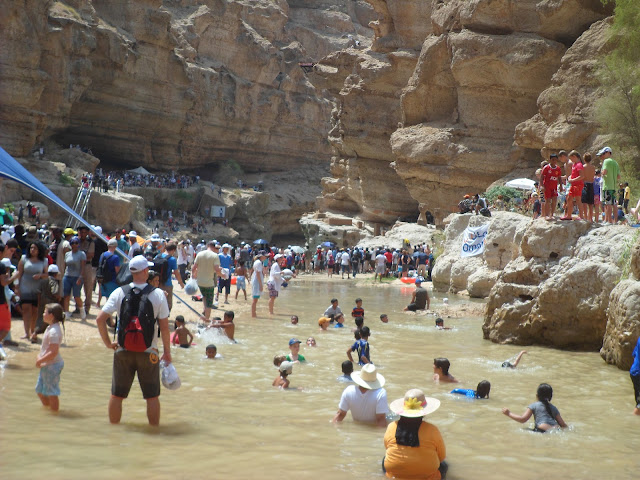 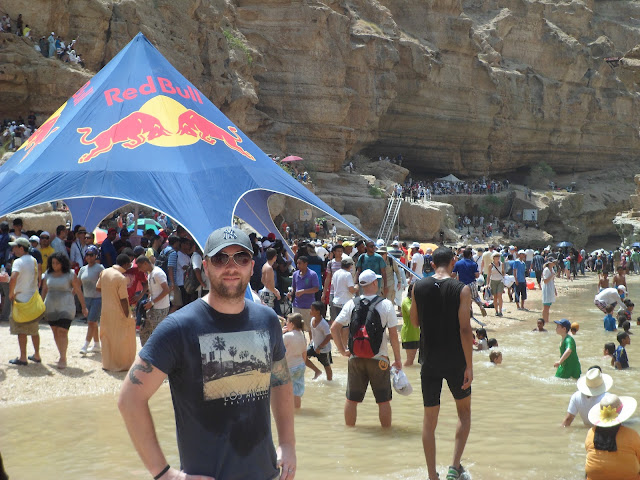 There were just people everywhere all over the ledges of rock waiting for the show. The dance music was blaring and the atmosphere was electric, it was really cool to just hang about and soak it all up. Unfortunately the most soaking was my clothes, the only thing ruining my happiness was my sweaty self.. 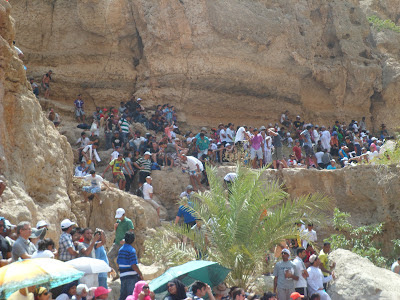 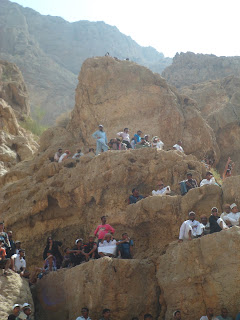 Then when I had actually remembered why we were there I looked up into the cliffs and saw the tiny diving platform… Holy Macaroni.. it is 27.5m above the water and believe me that is crazy high. Or as we would say back home, hoorin high! 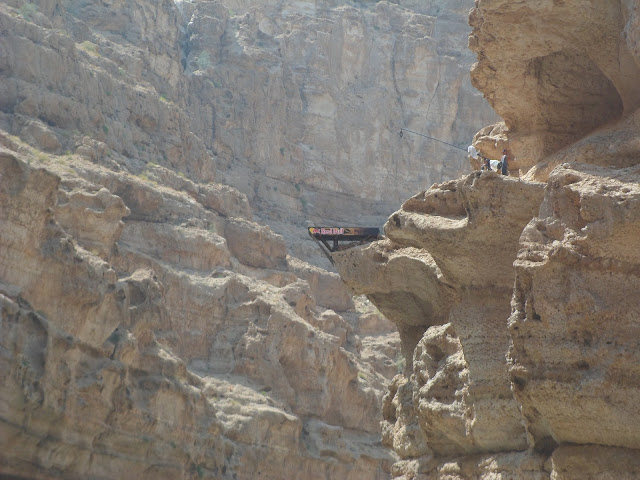 The show got underway and it was pretty amazing what these guys do but I couldn’t help but wonder if it hurts diving from such a height into the water? How do they get back up the cliff again? Where do they practice this diving if swimming pool boards are only 10m high with no wind?
But then all my questions were soon forgotten for a while when I saw the most original hat I’ve ever seen. What do you do when it’s freekin boiling hot and you can’t find your hat? Well you deflate a football and wear it on your head of course. 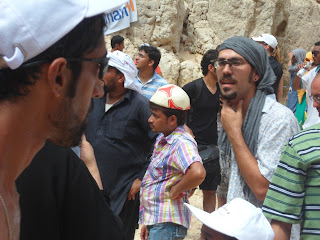 I can honestly say I have never sweated so much in all my life as I did today, the wadi was just like a big sun trap and it got very uncomfortable being so hot. Some people had the right idea and chilled out in the water to watch the show while holding onto rubber rings. Next time I will be more prepared and I will not be wearing golf shoes- probably some ugly but “sturdy” shoes that I swore i’d never wear but this isn’t the place for my diamante sandals.
Worlds sweatiest girl award goes to me!!

On the way home we were so soaking wet with sweat we had to take out t-shirts off and put them out the car window to try them off a bit, they flapped about in the wind it seemed to work. Unfortunately Colin was a little delirious from all the sunshine and instead of opening his window he opened the car door while driving at 120km/70mph. While still holding the car door open as he is driving he turns to me and goes “I just opened the door”, I didn’t even know what to say other than “WHAT ARE YOU DOING?” while staring at him as he stared at me. The extreme sunshine makes you do funny things, he compared it to people putting an electric kettle on the hob by mistake. Maybe you had to be there at the time but it was very funny..
Ok so I’ll admit that I didn’t take this next picture but I wanted to show you it so you could get an idea of how high up these divers are and what they see from the top. I really don’t know how they do it, balls of steel. The winner was a British guy called Gary Hunt. Go team GB whooo!

So after our early start then busy day and our friends round tonight with their new puppy we are both exhausted. Colin is in bed watching Doctor Who on his iPad and getting annoyed at me for using all the internet speed uploading my pictures, ahh married life 🙂 Night night. Or for you Graham, Noite Noite. x
Uncategorized

Making the most of the Scottish Food

The search for Fish & Chips in Muscat…

Welcome to my crazy world! This is my life as an Adventure Addict, Mama, Scottish Expat living in Oman and a Girl About Town.